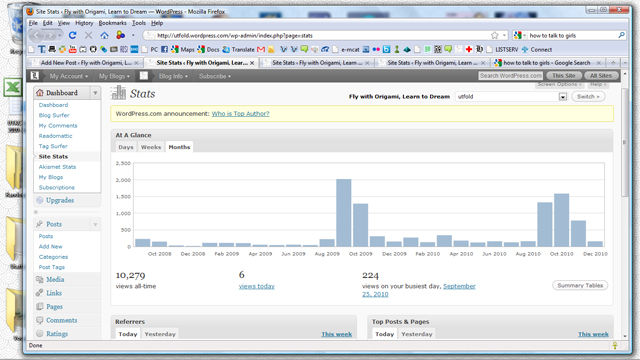 Persona here. Apparently all your execs are studying their arses off, so the prez asked me to make a wrap-up post, seeing as how I still have access to the site and all. Prepare for some delicious statistics action (unless you’re emoing over STA220).

Notice that someone updated the BG and banner for Christmas. Good job, someone.

The featured picture is about total visitors per month, since Sep 2008. That’s >2 years ago, folks, FOLD was 1 year old, founded by the legendary Lucy and her friends. Even your prez was a tiny little first-year, one of the ~50 people who read FOLD’s very first post.

The next September, FOLD exploded with ~2000 views. That year, FOLD got featured in The Varsity, U of T’s official blog, and was the subject of some ignorant comments in the midst of the UTSU funding controversy. But interest waned as the year went on.

This September couldn’t beat last September, but October numbers actually exceeded September’s, and these two months alone beat out all of the last year’s combined. November’s dropped considerably, but not as much as in 2009.

Perhaps this year’s FOLD members are a more resilient bunch?

Congregating data from the site’s creation, there has been

Well, that’s it from me. Hope this provides some sort of closure for the holidays…

Oh yeah. FOLD’s gonna teach origami to some children in Hart House’s Great Hall next Wednesday 4-6. That’s right, smack dab in the exam season. Some execs are even coming at 5, from their STA220 exam. If you’re brave enough, come and help too.